A few years ago I found myself in a legendary convergence, a kismet of epic proportion, a “big bang” that shook me to the core. This wasn’t something trivial like singularity. This was bigger, much bigger.

I needed to build app for Windows 8 that demonstrated some fundamental principles of WinRT and Modern UI development. It also so happened that I needed to renew my vehicle registration and I was dreading the idea of waiting in line for hours. Out of this came <insert drum roll> RMV Awesome - “The Most Awesome App for the Massachusetts Registry of Motor Vehicles”.

I know! It is huge! Feel free to take a moment if you need to absorb the enormity of this awesomeness.

Reader’s Note: For those who failed to detect the hyperbole in the proceeding paragraphs you may want to stop reading my blog forthwith. It won’t get better, I promise.

To begin with I needed to determine if the Massachusetts Registry of Motor Vehicles (RMV) even provided the data I needed. I knew they had a web site that included the wait times for each branch, but I wasn’t excited about the idea of screen scraping the data I wanted. Luckily Massachusetts provides developers with a broad collection of data from the Dept of Transportation (including the RMV). In particular I found the Branch Wait Time Feed which lists the wait times for registration and licensing at each branch location.

To use this feed I will fetch it using the HttpClient and convert it to an XDocument. I can then use LINQ to iterate over the feed and update the data within my app.

Unfortunately I don’t get all of the data I need from this feed. While it gives me the branch and the times, it doesn’t include anything beyond a name. In order to keep things simple, I decided to code in some static that I’m sure won’t change any time soon. Obviously this is - to put it mildly - less than idea and I cannot state strongly enough that you should not do this. This is a demo so I’m cutting this corner but in a real app this data belongs out of band from the app itself. In a later demo I’ll show how you can use Azure to accomplish this but for the time being I’ll be doing the wrong thing.

My overall design for v1 here is simple master-detail model. I need a page that lists the branches that the user can pick from and a details page that covers a single branch. 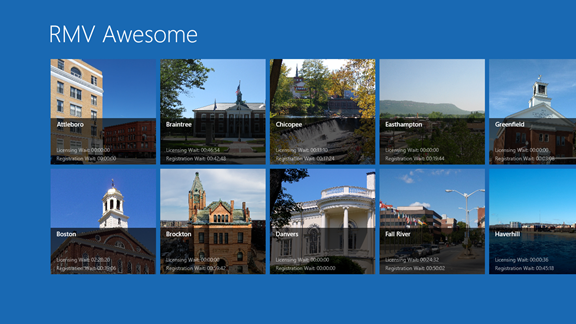 I started with a location list. This is a grid displaying each branch with the city, a summary status and a city image (an image I’m pulling from Wikipedia). Clicking a location will open up the details page. 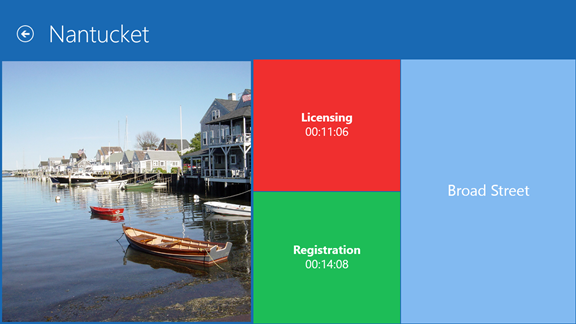 The details page shows a larger version of the city image, the address and the wait times for Licensing and Registration separately.

This article is the beginning of a series on developing apps for Windows and Windows Phone. This version of the app referred to in this article will act as a foundation for future articles. As the series progresses I will be adding additional features and documenting them in greater detail than I have here. Here is a list of some of the features ideas I’ve been toying with:

If you have any ideas, please drop a note. I’m happy to focus on any area.